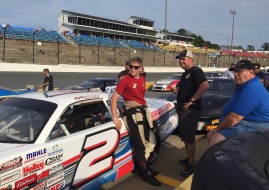 Not resting on his laurels, however, Snider is already planning his attack on the next CARS Tour race, the Sept. 19 Bakerdist.com 200 pres. by Sports Radio 100.3 The Team at Myrtle Beach Speedway. Snider is a last-minute entry in Thursday’s special Darlington Race Weekend night of racing and will be competing in the twin features for the NASCAR Whelen All American Late Models.

“We want to be as prepared as possible for our CARS Tour battle there on the 19th, so I guess you could call it part of our pre-race strategy for that incredibly important race,” said Snider, now settling back into school days as a junior at Belmont-Abbey. “Don’t get the wrong idea. It won’t be a scenario of us just going there and logging laps. We’re taking our CARS Tour car over there and will be doing all we can to win the race. If we tear her up, we’ll still have a couple of weeks to get everything back shipshape for the CARS Tour race.”

The hard-charging 20-year-old driver had the most impressive weekend of his brief stock car racing career at Concord last Saturday, winning the pole and leading the majority of the laps before having to settle for a runner-up finish. His stirring performance saw him leave the track as the LMSC division’s points leader with only two races remaining to determine the inaugural series champion.

“It was a day of many firsts for my NASCAR America Chevy Team and me personally as a driver,” said Snider. “It was my first career pole in the CARS Tour series, so our night really started off in the right direction for sure. Our best start this season had been third at Tri-County back in June and in the recent races we were a little disappointed in how we’d been qualifying.

“I think it surprised a lot of people that leading the first lap there was actually the first lap I’d ever led on the CARS Tour. So that meant I had already picked up bonus points for the pole and for leading a race. Those were the first bonus points I ever earned in the series. We even led at the halfway lap to gain another bonus point.

“No, we didn’t get our first CARS Tour win there on Saturday night, but I still am so proud with how competitive we were,” said Snider. “Jeff (Caudill, crew chief) and the guys brought one of the best race cars I’ve ever driven to Concord and they deserve so much credit. We executed at a level I was so proud of. It was exactly what it’ll take to win the championship.

“From the time we unloaded until we put the No. 2 car back up in the trailer after the race, it was just a super job done by every member on our team. I’ve always considered Paul (Griffin) one of the very best spotters in all of racing. We are so blessed to have him as a big player on our team; not just up there on the spotters’ stand, but down in the trenches with us during the day, too.

“The end result wasn’t the big ‘W’ we were hoping for, but it still was our best career finish on the CARS Tour,” Snider offered. “At the end of the day, we didn’t get the first-place finish, but we did come out of there first as far as the big picture goes. We are leading in the points and that’s a first that we are definitely proud of.”

Even though Snider has yet to win in the ultra-competitive CARS Tour series, his record to date is simply stellar. In the eight races put into the record book so far, he has five top-five finishes and is the only driver to post all top-10 finishes. He has an incredible 4.9 average finish after a 6.8 average start. He has completed a remarkable 100 percent (1,000 of 1,000) of possible laps.

As for Myrtle Beach and his expectations there, Snider, as usual, cuts to the chase.

“Man, I really don’t know what to expect,” said Snider. “We ran there last fall in their big show and ran pretty decent (started 17th and finished 23rd in the Nov. 22 Myrtle Beach 200 after running as high as ninth and getting spun out), so we do have some notes on the place and are reasonably optimistic going back over there. Because of the sand and all, it’s a pretty odd track and the grittiness really adds to the tire wear. It’s fun and challenging…and as usual, I can’t wait to get out there and get after it.

“We’ll certainly be going for the win, but the most important thing is gathering all the knowledge we can in preparation for the big CARS Tour race there,” Snider concluded. “It would be incredibly cool to win there on Thursday night and come back in there on the 19th with that victory on our resume.”

Thursday night’s schedule at Myrtle Beach Speedway will also feature the Chargers, Mini-Stocks and Super Trucks in action. Tickets are only $15 for adults, with kids 12 and under admitted free. Grandstand gates open at 5:00 p.m. with qualifying at the same time and feature racing beginning at 7:00 p.m. The LMSC drivers will compete in twin 40-lappers with the winners receiving assured provisional starting spots in the Nov. 14 UNOH 400 there.

The Sept. 19 CARS Tour schedule on the 0.538-mile oval opens with Friday’s open testing from 1:30 p.m. till 5:30 p.m. Saturday’s schedule sees alternating practice sessions beginning at 12:30 p.m. Qualifying is set for 4:30 p.m. and last-chance races begin at 6:00 p.m. The Super Late Model 100-lapper is scheduled to get the green flag at 7:30 p.m., followed by the 100-lap feature for the Late Model Stock Car division. Grandstand admission for the incredible night of racing is only $20. Youth tickets (ages 7-12) are $10 each and children 6 & under are admitted free of charge.

* * *
For additional information on Myatt Snider and his No. 2 NASCAR America Racing Team, please visit www.myattsnider.com. You can also connect with Myatt on Facebook (www.facebook.com/myatt.snider) and on Twitter (@MyattSnider).