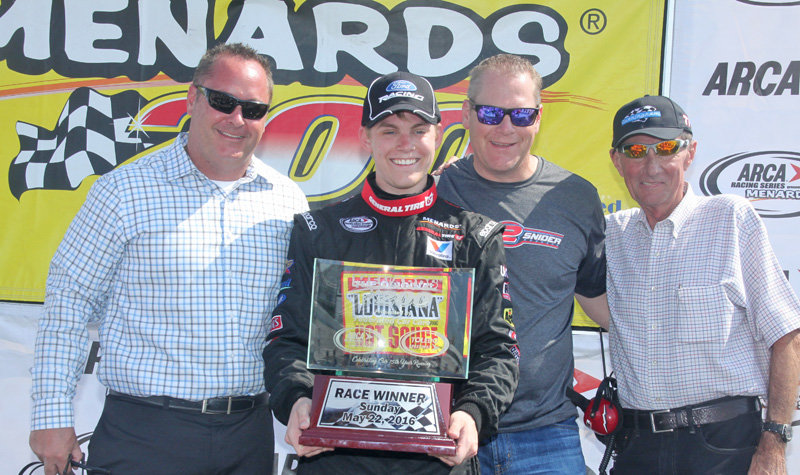 TOLEDO, Ohio (May 22, 2016) – If rookie Myatt Snider wasn’t exactly sure of his ability to win going into his career-first ARCA Racing Series presented by Menards race, he’s more than convinced now.

“I knew Cunningham Motorsports was capable of doing it; I just wasn’t sure if I was capable,” Snider said from the 7-Up Winner’s Circle.

There were indeed several new variables to conquer heading into the race…like pit stops.

“We made two pit stops today. That was only the second and third pit stops I’ve ever made. The biggest thing was getting everything I could from the car getting on pit road, and everything getting off.”

Snider got everything he could out of his car on the track too, putting up the fastest lap of the race and getting himself in position to take the lead when it mattered most. Snider beat his teammate Chase Briscoe off pit road during the final stop inside of 40 laps to go. Restarting fifth, Snider quickly worked his way forward and slipped underneath race leader Kyle Weatherman to the 167th lap. Snider never gave it up from there, although he had a hard-charging Dalton Sargeant growing in his rear view mirror.Dalton Sargeant & Kyle Weatherman racing at Toledo 2016

In fact, Sargeant, in the No. 55 Toyota Racing Development Toyota, was definitely gaining on Snider but ran out of time, finishing a career-best second, just three lengths away.

“I’m definitely a little frustrated, but overall we had a good car all day,” Sargeant said. “But at the same time, I’m happy for everyone at Venturini Motorsports. I’m continuing to learn and they keep giving me fantastic race cars. I felt we had the car capable of winning…we just ran out of time…we were coming.”

Weatherman, in the No. 58 St. Charles Glass Ford, finished third after leading three laps late in the race. Weatherman passed more cars than anyone over the race, battling back from an unscheduled pit stop early on.

“I’m disappointed…we had a tire go down before lap 30…we must have run something over,” Weatherman said. “I’m very proud of this team. We’re keeping our heads on straight…we battled back from the early-race incident and everyone stayed calm. We fought for everything we got today and I’m really proud of everyone on this Lira Motorsports crew.”

Chase Briscoe finished fourth in the No. 77 Big Tine-Cunningham Ford, which certainly doesn’t tell the whole story. Briscoe was the driver to beat all day, leading a whopping 157 laps before he got beat off pit road on the final pit stop.

“I’m definitely frustrated…I wanna win,” Briscoe said. “But this is part of it. It’s all positive…Cunningham Motorsports gave me the best car out there. It’s frustrating to lose one on pit road…I think we lost three or four spots. It put me on the outside for the restart and we got caught out there. That’s okay…I’m just so blessed to have this opportunity. I’m having the time of my life. So proud of all these guys at Cunningham Motorsports.”

Matt Kurzejewski made a late-race charge to finish fifth in the No. 52 Ansell-Menards Toyota.

“We’re improving each week,” Kurzejewski said. “This place is a lot harder than it looks. Ken Schrader (team owner) kept telling me to get to the bottom of the track. Fortunately, I finally started listening. When we got down, we passed a lot of cars. I’m really starting to gel with the guys here at Ken Schrader Racing. We’re improving and building momentum…I’m happy with it.”Myatt Snider Victory Lap at Toledo 2016

Snider, who showed up in victory lane with scuff marks down the right side, swapped the top-spot once with Briscoe to lead 135th lap, but Briscoe took the lead right back the very next lap.

“I scraped the wall getting into one…that was my fault,” Snider added. “But we won the race so I’m not complaining. My crew chief Paul Andrews worked so hard to get us here. We tested at Michigan this week…he (Andrews) had so much to juggle. After the busy week we had, I wasn’t sure how this race was going to play out, but I like the way it worked out. This track is so much fun…I like it.”

Josh Williams finished sixth in the No. 6 Musselman’s Apple Sauce Chevrolet. Gus Dean battled back from a lap down to finish seventh in the No. 98 Cab Installers-Mason Mitchell Motorsports Chevrolet. Tom Hessert, celebrating his 30th birthday, finished eighth in the No. 25 Renton Coil Spring Toyota.

Brian Keselowski finished ninth in the No. 5 Keselowski Racing-Gerhart Ford. However, Keselowski was more of a factor than the final result sheet shows. He was in position to win well inside the top-five most of the race before he received a pit road penalty during the final stop. Keselowski left pit road with a wedge wrench still in place, resulting in an extra trip to pit road to remove it, putting him much further back in the line-up late in the going.

Bo LeMastus, in his own No. 42 Crosley Brands-T&T Construction Toyota, finished 10th, one lap down after leading five laps.

The race went green most of the way with just four cautions for 28 laps for minor incidents.

The ARCA Racing Series presented by Menards travels next to the New Jersey Motorsports Park road course for the ARCA 150 presented by Unique Pretzels next Saturday, May 28. As always, arcaracing.com will feature live timing and scoring and live chat of all on-track activities