INCREDIBLE CONSISTENCY HAS SNIDER ONLY ONE POINT OUT OF LEAD 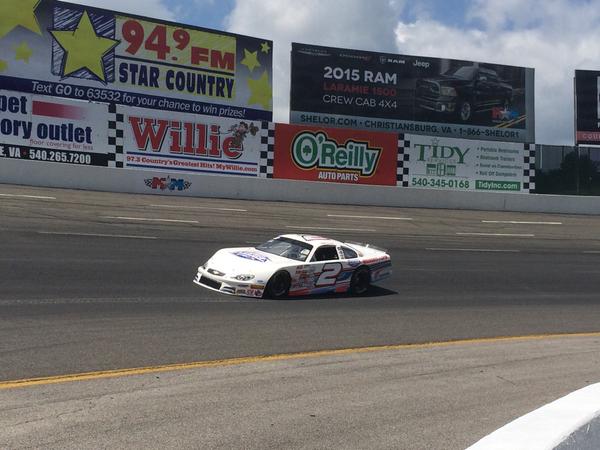 Myatt Snider continued to display his incredible level of relentlessness in last Saturday’s (July 11) Food Country USA 250 CARS Tour battle at Motor Mile Speedway. After turning some of the fastest laps in practice, Snider was a bit disappointed with his 11th-place qualifying effort. His charge up through the field to finish third was another head-turning performance by the popular young driver.

“After a hard fought battle…well pretty much everywhere…my No. 2 crew brought home the NASCAR America Chevrolet to another solid top-five finish,” said Snider. “Starting back where we did, it was a big test of patience. We just focused on passing the cars in front of us one by one. With it being only 125 laps, there’s only a certain amount of conserving that you can do. I think we’re really getting a good handle on that. When it’s go time, you need to have something left to make your charge at the end.”

After six races have been completed on the 2015 CARS Tour Series schedule, Snider is second in the LMSC division points, only a single point out of the lead. He is the lone driver to finish in the top 10 in every race. He has an impressive 6.0 average start and 4.5 average finish.

“We have four races remaining to determine the championship and we’re proud of the strength and consistency our team has shown,” said Snider. “We’ve been able to compete at a really high level on so many tracks where we’ve raced for our first time. We’re headed back to Orange County for our next race. It’s a track where we started fourth and finished third on back in April. We were in contention all race long and broke a valve spring at the end. I probably don’t have to tell you how excited we are to be headed back there to race.”

Snider’s next race, the Summertime Showdown 250, is set for Saturday, August 1 at the 0.375-mile Rougemont, North Carolina race track.