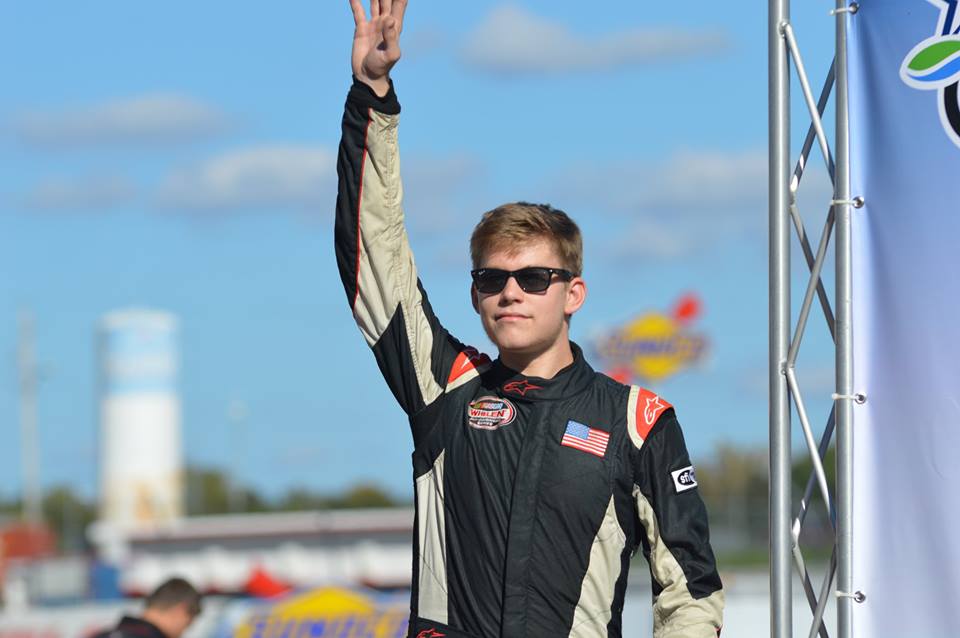 -Fresh Off Biggest Win of Career, Rising Star After Another Win in Thanksgiving Classic-

“This weekend’s 200-lapper will be our final race of the 2015 season,” said Snider, who again lived up to his nickname “The Show” in winning at Myrtle Beach. “There’s no better way of closing out the successful year we’ve had than to get another win on Sunday at Kenly (Southern National). It would be like putting an exclamation point on our season.”

Snider started fifth in last Saturday’s UNOH Battle at the Beach after finishing second in his heat race. He fell out of the top-five for only one circuit during the entire 200-lap battle. He watched and learned from the leaders during the first half of the race, crossing the line in third at the halfway break. Once he was able to get the lead, there was no holding Snider back as he was unstoppable in scoring the signature victory.

“The big win at Myrtle Beach was a huge tribute to the fantastic job my team has done all year long,” said Snider, son of noted NBC-TV Sports reporter Marty Snider. “Jeff (Caudill, crew chief) and the guys have given me incredibly fast race cars week in and week out.

“Our success there last weekend was a culmination of great preparation meeting opportunity and executing at a winning level,” said Snider, a junior at Belmont Abbey College. “It was our fourth visit to that track and we learned a lot every time we had raced there.

“When we went over there for the twin-feature night around the Darlington Cup race back in September, we paid a lot of attention to how Sam Yarbrough raced the track. He started his career there and won championships there. We finished right behind him that night and chalked it up as great experience.

“The CARS Tour race at Myrtle Beach (Sept. 19 Bakerdist.com 200) was a real eye-opener for us in getting the hang of what it takes for tire management on that track,” said Snider. “We went way too conservative there that night and paid the price for it. We fell back to 15th and dug ourselves too deep of hole to get out of. We were able to get back up to seventh before the laps ran out.

“Our strategy last weekend was to hang around about where we started and keep the leaders in sight. Tommy Lemons was the toughest guy out there from the first practice on. We watched him closely during the first part of the race to learn his line and consider his strengths and weaknesses. When it was go time, I knew I could run the top really well and it worked for me. I was able to take the lead from Tommy, hold him off on two restarts and control the lead the rest of the way.”

As for this weekend’s battle at Southern National, Snider said his No. 2 NASCAR America Chevy Team is ready for the challenge.

“Any time you head back to a track where you’ve been successful, it’s a comforting feeling,” said Snider. “We have so much experience there and we’ve won there before, so we already have that going in our favor. We’ll be racing our big spring car again this weekend and know how strong it can be.

“The competition will be as strong as ever at Kenly. We know we’ll have to beat guys like Tommy (Lemons) and Lee (Pulliam) if we are to win again this weekend. And you have to throw the McCaskills (Deac and Bradley) into the mix every time you discuss potential winners on that track.

“I feel like our confidence and determination is at an all-time high heading into this Sunday’s race,” Snider added. “It would be such a great way to close out the 2015 season by winning two huge races like these on consecutive weekends. It certainly would be another huge credit to our team if we can pull it off.”

For additional information on Southern National Motorsports Park, please visit their website at www.snmpark.com. The track is active in social media; with a Facebook page (https://www.facebook.com/SouthernNationalMotorsportsPark) and Twitter account (follow them at @SNM_Park).
* * *
For additional information on Myatt Snider and his No. 2 NASCAR America Racing Team, please visit www.myattsnider.com. You can also connect with Myatt on Facebook (www.facebook.com/myatt.snider) and on Twitter (@MyattSnider).