MYATT SNIDER READY FOR MOST CHALLENGING WEEKEND OF HIS CAREER 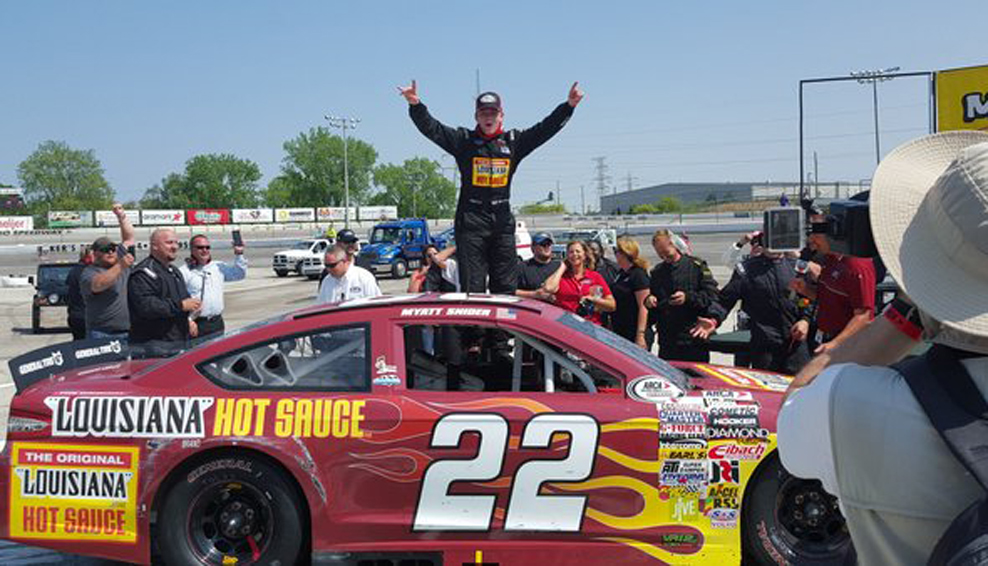 “It’s certainly a challenge, but it’s one that I am looking forward to and feel so blessed to have the opportunity to experience,” said Snider, a junior at UNC Charlotte and son of noted NBC-TV Sports broadcaster Marty Snider. “I’ll be giving it my all in trying to win both races and the really cool thing is that I’m confident we’ll have cars capable of taking the victory on Friday and Sunday.”

As if racing a big powerful ARCA car around the 1.5-mile Kansas track on Friday and piloting a heavy car with much less horsepower on the tiny Martinsville bullring on Sunday wasn’t challenging enough, Snider is also faced with tackling a demanding travel schedule in order to compete in both races.

“We’ve been looking at the logistics aspect for some time now,” said Snider. “The weather forecast for Kansas is great for the weekend, so Friday night’s ARCA race should roll off as scheduled. We’ll fly back with the crew on Saturday morning and hopefully be back in Charlotte around 10:15 a.m. Then, Jeff (Caudill, crew chief) and I will hop in the car and head directly to Martinsville. We’ll really be hustling it because practice is scheduled to start at one o’clock.”

While Snider has logged many laps on the tight little .526-mile paper-clip-shaped Martinsville track, he has yet to even lay eyes on the Kansas 1.5-mile tri-oval layout.

“Kansas is another place that we’re attacking with absolutely no experience at all,” said Snider. “I’ve watched a lot of the old Cup race videos and we’ve been doing a ton of iRacing on the Kansas track, so I think I’m as prepared as possible without ever actually seeing where we’re racing. We’ll definitely be trying to maximize what practice we get there on Friday.

“One thing that I can always count on is that Paul Andrews and my Cunningham Motorsports team will have prepared us a No. 22 Louisiana Hot Sauce Ford that can win on Friday. As always, the preparation is critical, but so is execution and having a little racing luck on your side. Cunningham didn’t win the Kansas race last season, but they did have the strongest car there.

“It’s a situation again where I will have both Chase (Briscoe) and Austin (Cindric) as teammates for the race,” said Snider. “We all get along really well and the communication is great between the teams. That will definitely help in overcoming my lack of experience there. I hope to qualify well, run up front and challenge for my second career ARCA win there on Friday night.”

Snider is bubbling with confidence when he talks about his chances for winning Sunday’s Martinsville bullring battle.

“We were among the fastest cars there for the open testing there last Thursday,” said Snider. “There were about 80 cars there it seemed. Tommy Lemons was turning the fastest laps consistently, but we were hanging right there with him. We made about 20 different runs and logged a good 100 or more laps total.

“It’s the biggest race of the season for Late Model Stock Cars and with it paying $25,000 to win, everyone in the sport will be there battling it out for the big prize. There’s both qualifying and heat races that determine the starting field. Several strong competitors likely will miss making it into the 200-lapper. It’s always so exciting for the fans and demanding on the drivers. It’s a race that the dominant car doesn’t always win because many times they are not around for the finish.”

A new wrinkle in the 200-lap race’s format this season sees two competition cautions; one at Lap 100 and another at Lap 175. During the first stop, cars will be lined up on pit road and allowed to take fuel only with no other adjustments to the cars permitted. There will be a blind-draw invert for the cars running in the top-10 going into the second half of the race. On the second stop, teams will be allowed to change four tires and make any adjustments needed to their cars.

“It has always been such a survival situation anyhow,” said Snider. “This new format certainly guarantees an interesting run to the finish. I know we’re gonna have a fast race car and I can honestly say that this is the best I’ve ever felt going into this race at Martinsville. We’ve been in the position to win in the past, but gotten taken out with just a few laps to go. Rest assured, we’ll be doing everything we can to be the ‘last man standing’ there on Sunday afternoon.

The schedule at Martinsville includes Saturday practice beginning at 1:00 p.m., followed by group qualifying at 4:00 p.m. Sunday’s schedule sees the first of three qualifying heat races beginning at 12 noon, followed by a last chance race. The ValleyStar Credit Union 200-lap feature — NASCAR’s biggest, richest and most prestigious Late Model Stock Car race gets the green shortly after the preliminary action concludes. While there is no live TV or radio coverage, media outlets such as Speed51.com and Race22.com are great sources for the latest news on the race.

For additional information on Myatt Snider, please visit www.myattsnider.com . You can also connect with Myatt on Facebook at www.facebook.com/myatt.snider and on Twitter at @MyattSnider