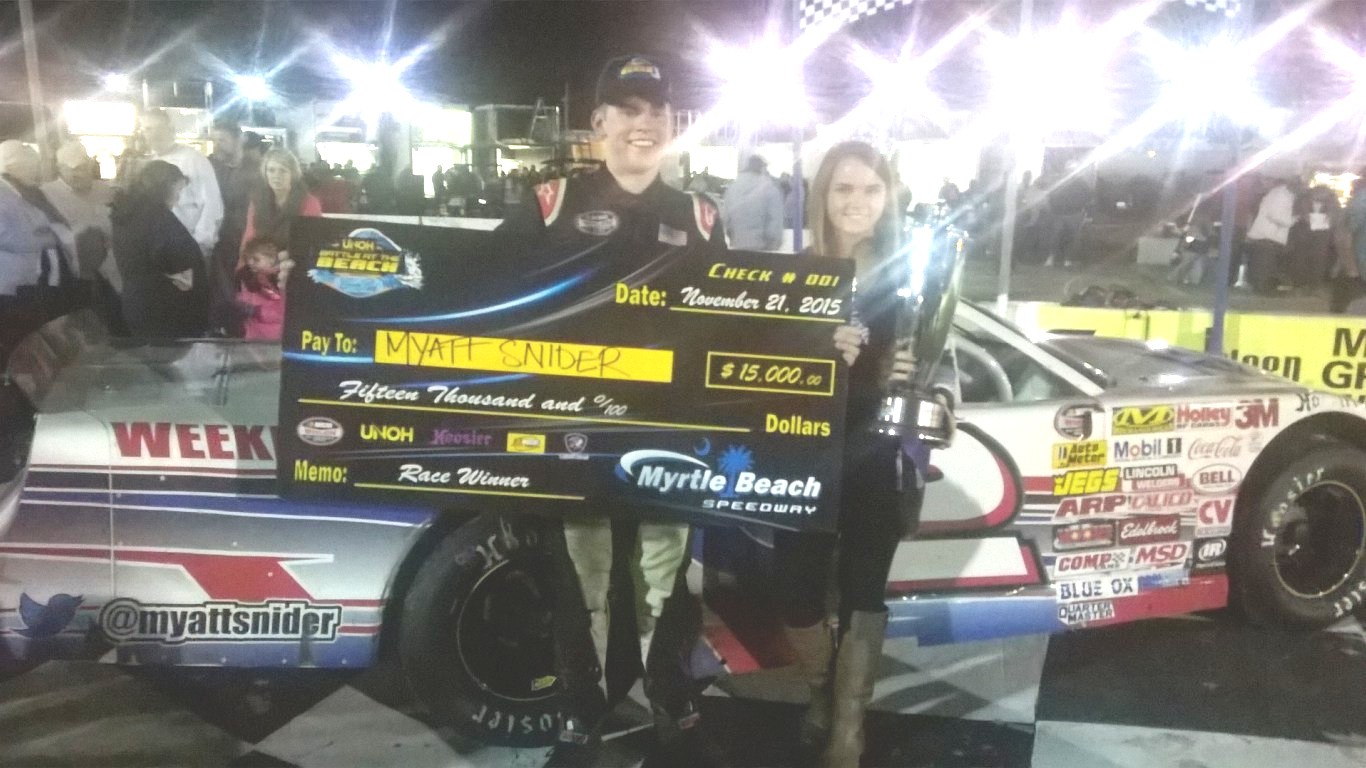 “It’s just so cool to be able to come back to your roots and race these cars against such talented drivers,” said Snider, a junior at UNC Charlotte and son of noted NBC-TV Sports broadcaster Marty Snider. “We’re heading over there planning on having a lot of fun, but it will definitely be serious business in our effort to win the race.

“We’re the defending race champions and it pays $10,000 to win,” said Snider. “That’s all the incentive we need to be bringing our A-game back to Myrtle Beach this weekend. Of course the big ARCA victory at Toledo this year is the statement win of my racing career so far, but taking the checkered flag first in this race last year is my biggest accomplishment in all the late model stuff.

“It wasn’t just the fact that we won last year’s race that makes it so memorable. The way we won it made it extra special. Battling with Tommy Lemons, Jr., and Lee Pulliam – two legends in late model racing – and holding them off for the win is something I will remember for the rest of my life.”

Here is the Myatt Snider “race review” from the 2015 Myrtle Beach battle:

“We showed a lot of strength in the CARS Tour championship,” said Snider, who posted top-10 finishes in all 10 races during the series’ inaugural 2015 season and finished third in the LMSC division’s points. “We were consistent all year. We were up front in so many races; I just don’t think we had the luck. Tonight, luck fell in our favor as well as good, hard preparation, hard work and me driving as hard as I could in those last couple of laps. I can’t thank all my guys enough. This is a great night, so I’m really happy about it.

“This is definitely a statement win because I felt like we’ve been there with all those long-lap races,” Snider said. “I just think we needed to learn a little bit more and that kind of culminated tonight. We’ve done all we need to do this year and this is such a great way to cap it off. I knew that I could run the top really well and that’s why I decided to go for it, get the lead away, control the race and it worked in my favor. I’m so happy with how it all played out and it worked in my favor.”

Snider was able to hold off Lemons during two late-race restarts to claim his first marquee win.

“It worked out for me both times,” Snider explained. “The first restart I got him because Tommy spun his tires. He was about even with me when we went. I think if he hadn’t, he would have beaten me. So I figured the bottom might work better on the next one. I was able to pull him and out-wheel him from there.”

“I kind of sat and watched the first 125 laps of the race, logging laps out there” Snider said, describing his early-race strategy. “I kind of just sat there, watching Tommy and seeing what he did. And then I applied it for the last 75 laps. I wanted to get the lead immediately because it helped me control the race.

“We’re both great racers and have a lot of mutual respect, I feel” Snider added “He drove the wheels off of it but it looked like he was just a touch tight in the center. So I tried to capitalize on that and run it slower into the middle of the corner so I could get under him. He’s a great racer and it was really tough to beat him.”

“This victory is only because of me in a small way,” Snider said after an emotional celebration with crew chief Jeff Caudill and team members. “My guys work so hard, they’ve been giving it their all the whole year and they definitely deserve it.”

“We’re confident that we can come back and win again there on Saturday,” said Snider, who competed in nine ARCA races this season, recording one win, three top-five finishes and five top-10s. “We know what it’ll take to get to Victory Lane and look forward to giving it our best shot at making it two-in-a-row.”

This weekend’s schedule at Myrtle Beach Speedway kicks off on Friday with alternating practice between the LMSC division and Modifieds beginning at 11:45 a.m. and running until 7:15 p.m. Alternating final practices on Saturday begins at 8:30 a.m. and goes through 9:30 a.m. Qualifying for the LMSC division is set to begin at 12:00 noon. The front row will be set from qualifying, P3-P5 are lock in drivers, P6-P20 are from qualifying times. Positions 21-40 will race into the feature from two 25 lap qualifying races and promoter’s options for the final three starting positions sets the 43-car field. Qualifying races begin at 2:45 p.m., with the 125-lap modified feature expected to begin at 3:45 p.m. The 225-lap LMSC feature (break at Lap 125 & final 25 laps run under green) is set for a 5:15 p.m. start. Saturday’s grandstand admission charge is $20 for adults, while kids 12 and under are admitted free.

Race22.com will have live coverage of the event. Fans will be able to access that coverage through the homepage of Speed51.com.