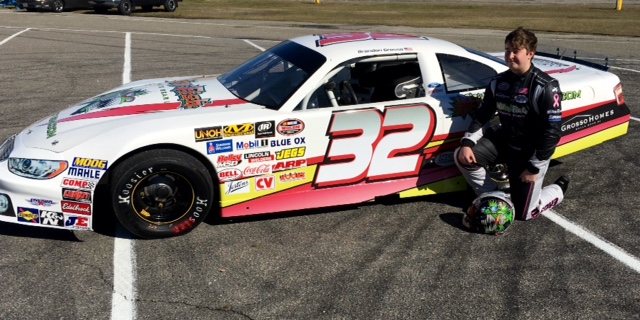 Grosso’s team will be led by veteran crew chief Jeff Caudill and will operate out of his shop in Four Oaks, North Carolina. The schedule will see Grosso compete in all 12 CARS Tour LMSC division races in 2017, as well as select NASCAR Whelen All American Series events. Grosso will be driving the primary car out of the MSR stable this season. Snider, who is set to be behind the wheel of a Kyle Busch Motorsports entry in eight NASCAR Camping World Truck Series races this year, will also be a teammate to Grosso in several of the LMSC events.

“After Brandon’s team came to us looking for some direction, we went to work on the objective of getting him the experience he’ll need to get to the next level in his racing career,” said MSR team owner Marty Snider. “It was a perfect fit for us at MSR as we’ve been plotting the same course for Myatt for a couple of seasons now and it has been proven successful.

“The bonus aspect for everyone involved this year is that Myatt will continue to supplement his truck racing program for KBM with a solid schedule of Late Model Stock Car races,” added the elder Snider, a noted veteran broadcaster for NBC-TV Sports. “Myatt will be able to serve as a mentor for Brandon as they both continue to progress up the ladder. It’s a pretty cool situation for everyone involved and we’re really excited to see what lies ahead for the 2017 season.”

“I’m ready to get this year started and I’m really looking forward to it,” said Caudill, who has managed the MSR team since Snider moved up to Late Models four seasons ago. “Running Brandon in the whole CARS Tour schedule will be a challenge that we are ready for. We had so much fun running it with Myatt two years ago and we almost won the championship.

“We’re adding some personnel this season to make sure we have two potential race-winning cars,” said Caudill. “Jamey (Jeff’s brother, Jamey Caudill, who is a Late Model Stock Car legend) will serve as Myatt’s crew chief when he races with us. We know the mission is to get Brandon all the experience and seat time we can in 2017. We’re convinced that running the two cars and having Myatt there so often will help shorten Brandon’s learning curve.”

While this season marks Grosso’s first fulltime venture into asphalt short-track racing, it isn’t the first time he has competed in stock cars. He drove some Limited Late Model races back in 2014 for Roger Johnson and the Performance Warehouse Racing Team. The youngster’s first test at Hickory (North Carolina) Motor Speedway that year drew the attention of one of the sport’s most seasoned veterans, Dexter Canipe. Grosso heeded the advice of Canipe and returned to dirt racing in order to get more experience.

In 2015, Grosso was the first racer ever to receive special permission from the State of New Jersey to compete in a full-size racecar at the age of 15. That allowed him to participate in the Dirt Sportsman Modified and Dirt Crate Modified divisions at the New Egypt Speedway. In his rookie season, he claimed five feature wins and finished third and fifth, respectively, in the division’s point standings.

“I’ll always be thankful to Dexter for giving us his advice,” said Grosso, who began his racing career in 2005 and honed his skills in Quarter Midget Racing where he amassed 250 wins and claimed 17 championships. “Going back to the dirt for the last two seasons has been so helpful. I’m confident that I now have the throttle and car control necessary to be successful in racing the Late Model Stock Cars on asphalt.”

Grosso’s arrangement for the 2017 season with MSR came as the result of tests last fall in an ARCA car with Paul Andrews and Cunningham Motorsports at Motor Mile Speedway in Virginia and Salem Speedway in Indiana.

“Our goal is to be able to move up to ARCA in the near future and we were looking for the best course to get prepared for it,” said Grosso, now a junior at Montgomery High School in Montgomery, New Jersey. “When we studied what Myatt has been able to accomplish over the last few years, we were sold on following his footsteps and route up the ladder.”

Grosso’s 2017 racing campaign begins this weekend as both he and Snider will head to Myrtle Beach Speedway for the running of the 2nd Annual ICEBREAKER on the semi-banked 0.538-mile asphalt oval.

“We wanted to give Brandon a little extra seat time before we head to Myrtle Beach, so we took Myatt and him to Kenly (Southern National Motorsports Park) last Saturday for a little testing,” said Caudill. “I thought the day was well worthwhile. He and Myatt worked really well together. Brandon was a couple of tenths off there at the end, but I think the speed will come with more laps. Myatt has won races at Myrtle Beach and has a good handle on how to get around that place. It’ll be a great way to get the season started for all of us.”

Grosso will be debuting his sharp-looking No. 32 NitroFish-Ultimate Gear/Superior Materials/KPK Development/Grosso Homes Ford at Myrtle Beach this weekend, while Snider will be behind the wheel of his familiar No. 2 MSR entry.

“The Icebreaker” action gets under way on Thursday at Myrtle Beach Speedway with optional open practice from 12 noon till 5:00 p.m. Friday’s schedule sees rotating practice from 10:00 a.m. till 12 noon and from 12:30 till 5:00 p.m. Saturday’s final LMSC practice is set for 9:00 a.m. LMSC qualifying (group format with 4 cars and 5 laps each) begins at 12:15 p.m. Racing begins at 1:45 p.m., with Vintage, Mini-Stock, Charger and Modified Divisions also in action. The NASCAR Whelen All American Series 125-lap feature is the program’s finale and will pay $5,000 to the winner.

* * *
For additional information on Myatt Snider and his No. 2 NASCAR America Racing Team, please visit www.myattsnider.com. You can also connect with Myatt on Facebook (www.facebook.com/myatt.snider) and on Twitter (@MyattSnider).
* * *
For additional information on Brandonn Grosso and his No. 32 NitroFish-Ultimate Gear/Superior Materials/KPK Development/Grosso Homes 2 Racing Team, please visit www.brandongrosso.com (under construction). Brandon is active on Facebook at https://www.facebook.com/Brandon-Grosso-Racing-Site-141758145860012/. You can follow him on Twitter at @BrandonGrosso32.