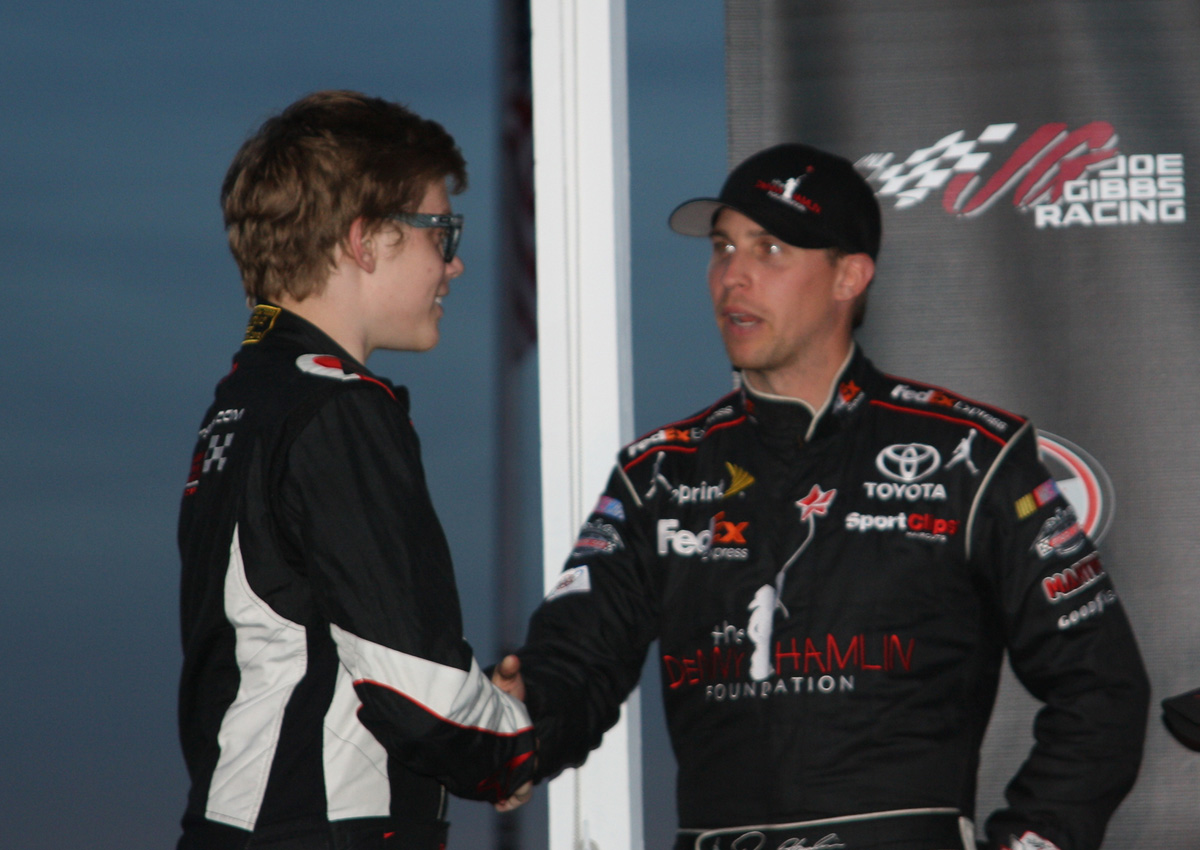 SOUTH BOSTON, Va. (April 22, 2014) – Some of NASCAR’s biggest stars are entered in Denny Hamlin’s annual Short Track Showdown set for Thursday at South Boston Speedway. Young Charger Myatt Snider is excited to have the opportunity to race against such a stellar field of drivers.

“It was such a thrill to get the invitation to compete in Denny’s big race,” said Snider, a 19-year-old NASCAR Whelen All American Series driver and rising star at South Boston and other NASCAR Home Tracks in the area.  “Denny, the Sadlers and so many other successful drivers started their careers at South Boston just like I’m hoping to do.  I read where Denny hasn’t raced at South Boston in 11 years.  It’ll be neat to see the homecoming for him and all those other guys.

“Kyle Busch and Matt Kenseth will be there, too, so I’ll have the opportunity to race against all the JGR drivers,” said Snider, who is balancing his on-track schedule this year with time in the classroom at Belmont Abbey College and regular work hours at Joe Gibbs Racing.  “I know they are taking this race pretty serious because Kyle even had Erik Jones shaking down his car at South Boston a couple of weeks back.

“Having the opportunity to race against Matt will be really cool,” added Snider.  “My job at JGR is working with the No. 20 team in their preparation for races.  I have so much respect for Matt, his career and his capabilities.  Getting to be out there racing against him will be like a dream come true.”

Snider has not been able to race as much as he has wanted this season, but is confident that situation is changing. He is hoping that a solid race day on Thursday at South Boston can lead to big things to come for the remainder of the 2014 season.

“We’ve had some mechanical issues and several rain-outs,” offered Snider, son of noted broadcaster Marty Snider. “But the last time we were at the track, we qualified in the top five and had top-10 finishes in both features.  So we have a little momentum building heading into Thursday’s big race at South Boston.”

Snider has competed in three races on the demanding 4/10ths-mile “SoBo” oval this season and a seventh rates as his best finish so far.  He competed in 38 races on the area’s NASCAR short tracks last year, scoring a win at Caraway and a second-place finish at South Boston.  He recorded top-10 finishes in an impressive 66 percent of his 2013 races.

“I’m really hoping that all the experience I have on that track will be beneficial there on Thursday,” said Snider.  “But there are so many drivers with so much more overall experience; I am coming in with realistic expectations.  Like I said, I am really thrilled just to be invited.  I am so excited to have the opportunity to race with such an incredible field of competitors and for such a great cause.”

Thursday’s track schedule calls for practice from 1 till 4 p.m.  Time trials and qualifying races are set to begin at 5:30 p.m.  Driver introductions are on tap for 7:45 p.m., with the 200-lap feature race expected to get the green flag at 8 p.m. ET.

Advance tickets to Thursday’s Short Track Showdown are available by calling the South Boston Speedway ticket hotline at 1-877-440-1540. General admission is $20 Advance/$25 Race Day for Adult; $10 Advance/$15 Race Day for Youth (ages 12-17); and Free for Children ages 11 and under (with an Adult ticket purchase). Season passes are not honored for this special event.