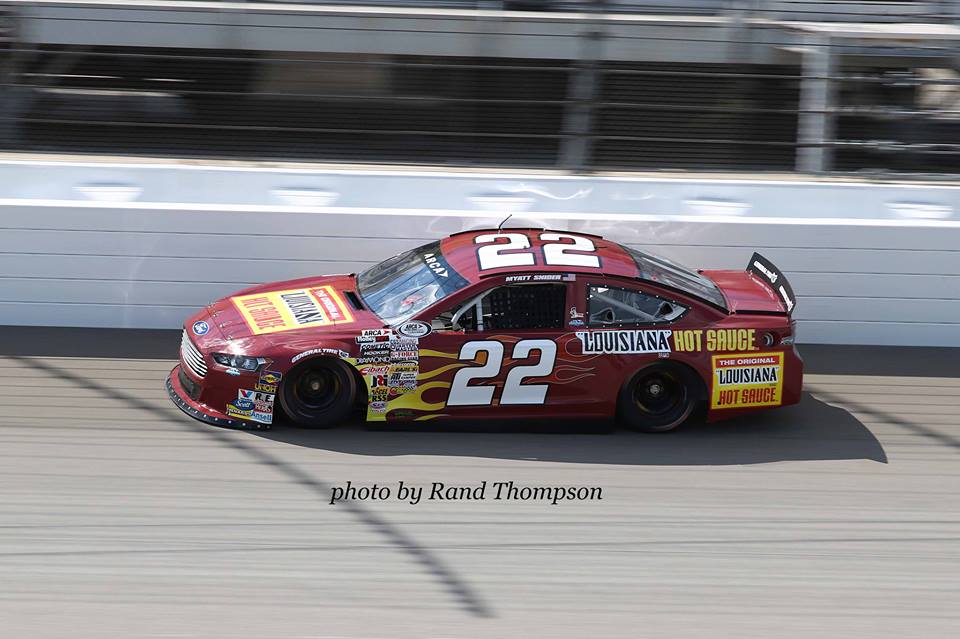 CHARLOTTE, N.C. (June 8, 2016) – Rising racing star Myatt Snider’s motto entering Friday’s Corrigan Oil 200 ARCA battle at Michigan International Speedway is, “The faster, the better!” Having won in his ARCA Racing Series Presented by Menards debut on the half-mile Toledo Speedway back on May 22, Snider is fully focused on proving his mettle on the high-speed 2.0-mile D-shaped MIS track.

“I thought we had a great day of testing there last month and I’m itching to get back up there for the race,” said Snider, who had never driven on any track larger than a half-mile until the May 19 ARCA testing at MIS. “We wound up running a 38.04 (-second, 189.260 MPH) lap, which was a close second on the overall speed chart that day.

“I’ll admit that I was a little nervous going into the test there,” said Snider, son of noted NBC-TV Sports broadcaster Marty Snider. “But after going down the long backstretch a couple of times, I got to thinking that it’s all relative. In my mind, I just expanded on how I would drive a big short track. It all came to me pretty fast and I adapted to the high-speed aspect pretty quickly and without any difficulty.”

After his spectacular debut victory at Toledo, Snider continued to turn heads in the most recent ARCA race at Pocono last Friday. Starting fourth in the General Tire #AnywhereIsPossible 200, Snider took the lead for the first time on Lap 9 and still held the point when he pitted for the final time on Lap 61. Track position and a loose handling condition relegated him to a ninth-place finish.

“In retrospect, I sure wish we would have pitted earlier, but I can’t complain,” said Snider. “It was a tremendous experience, we were able to lead the most laps and we accumulated a lot of notes. I learned that drafting is not such a huge effort as I expected. Surprisingly, the tunnel turn was really the most stable turn for our car until it went so loose on me. I can’t wait to get back there next month (for the July 29 ModSpace 150 ARCA event).

“The great thing is that the only damage we did to our car at Pocono was to the bumper bar,” Snider said. “It’s the same No. 22 Louisiana Hot Sauce Ford that will be racing again this weekend at Michigan. All our Cunningham Motorsports team has to do is that minor repair, then clean her up and we’ll be good to go.”

Last Friday’s race at Pocono also gave Snider his first opportunity to work with noted veteran spotter Brett Griffin. He says that the two clicked from the very first lap that Griffin was on the radio in the spotters’ stand.

“I’m extremely blessed to have two of the best spotters in the business working with me,” said Snider. “Brett has so much experience on all the NASCAR tracks and he’ll be spotting for me in all the companion races ARCA does with the NASCAR guys. I thought we communicated really well during our first race together at Pocono. I know what a huge South Carolina supporter he is and I’m just waiting for the appropriate time to say ‘Go Gamecocks’ on our radio.

“Paul Griffin has been my spotter forever it seems in my late model racing and he will be my eyes in the sky for all the other races,” Snider said. “He is such an important contributor to our team overall and it’s a comfort knowing he’s up there helping guide me along in the races.”

As for his expectations in Friday’s battle at MIS, Snider is quick with his response.

“I think a strong top-five finish is possible in my first race there,” Snider offered. “We’ll be fast for sure because that’s a track all built around speed.”